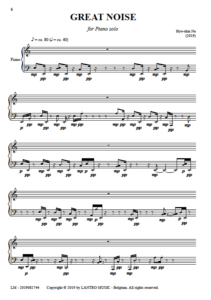 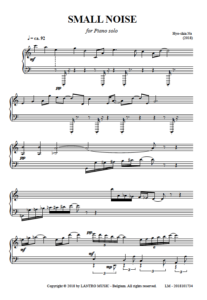 September, 2016 – I saw Augusto Giacometti’s painting “Peace” at the Albertina museum in Vienna. Upon returning home, I began to write a new duo for koto and piano in which the two musicians at first listen closely to each other’s playing to co-ordinate their parts. Towards the end of the piece, however, their parts diverge, and they continue separately, but peacefully, each at his or her own speed.

In 2018, I decided to write a piece for solo piano based on the piano part of “Koto, Piano II” and called it “Small Noise”. It eventually developed into a much longer and elaborate piece called “Great Noise” (2019).

While I was composing “Small Noise”, I happened to read Kafka’s short story called “Great Noise” in which many different sounds – some unusual, some ordinary, some humorous – were heard. I began to imagine a piano piece that didn’t directly follow Kafka’s story, but evoked the variety, suddenness, and unpredictability of Kafka’s writing. “Great Noise” was commissioned by the InterMusic SF and the Elaine and Richard Fohr Foundation.