Compositions in the spotlights – December 2016 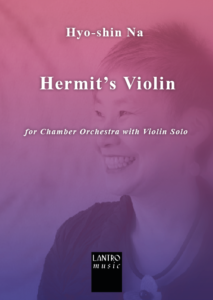 I happened to see Arnold Boecklin’s painting called “Hermit Playing  the Violin” at a museum in Berlin. This painting, in which an old hermit, alone in his cell, hunches over playing his violin, impressed me deeply. Three little angels observe the scene with a mixture of wonder and amusement. The painting was a strange combination of solemnity and innocence and, as I stood in front of it for a long time, I could almost hear the music the old man was playing (even to the point of wanting to suggest the next note for him to play!).    Upon returning home from Europe, I began to write “Hermit’s Violin” for chamber orchestra (oboe, clarinet in B flat, bass clarinet in B flat, bassoon, percussion, and string orchestra) with violin solo, serenely engrossed in imagining the hermit’s music.   “Hermit’s Violin” was written for the San Jose Chamber Orchestra and Cynthia Baehr.