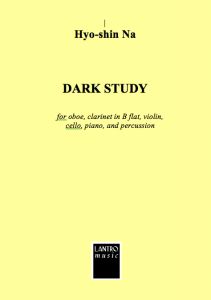 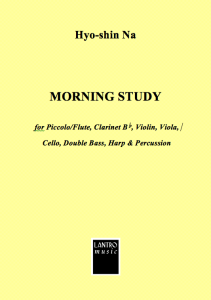 Dark Study (co-commissioned by New Music Works of the US and the Daegu International Contemporary Music Festival of Korea, 2014)

“Several years ago I began to notice every day at dawn and dusk a series of very short high metallic sounds; it took me some time to realize that the sound was coming from a pair of California Towhees that had nested in our backyard. This birdsong became for me just as dependable a part of each day as the change of light from night to morning and then, again, from evening back to night. Morning Study is related in various ways to this fluctuation between darkness and light and to the way the sound of the Towhees had become a part of this fluctuation. The piece was commissioned by Southwest Chamber Music and was written in the mornings between March and September, 2011.”

“Dark Study also concerns itself with the fluctuation between darkness and light but is more concerned with the period from dusk to dawn. While writing the piece, I thought a great deal about three literary works I had recently encountered.”

Dusk in Winter – W.S. Merwin
The sun sets in the cold without friends
Without reproaches after all it has done for us
It goes down believing in nothing
When it is gone I hear the stream running after it
It has brought its flute it is a long way.

Dante’s Inferno
When I had journeyed half of our life’s way, I found myself within a shadowed forest, for I had lost the path that does not stray.

I sit alone in the moonlight
Nothing worries me
But I hear something distant, delicate
The sound of the qin.

Or maybe it’s the cold wind in the pine forest
Or the fluttering of fingers
Over a serene heart.

That great qin player died long ago
No one in this world will know this music…
Dark Study was premiered at the Daegu International Contemporary Music Festival on June 25, 2014 in Korea. In the US, the New Music Works gave the US premiere in April, 2015 along with the Northern California premiere of Morning Study.

Have a look on our “catalogue” section – some pages of both scores are visible and can help you with your choice !